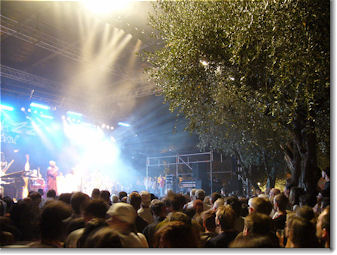 Nice in July is crammed with events but the oldest and most prestigious is undoubtedly the Nice Jazz Festival. Originally, held in the Roman ruins of the Jardins de Cimiez the Nice Jazz Festival has been going strong since 1948. Louis Armstrong was the headliner that year and subsequent years have seen great jazz artists like Dizzy Gillespie, Ella Fitzgerald, Miles Davis, Herbie Hancock, Diana Krall and McCoy Tyner mount the stage.

In recent years, as jazz became more of a specialized taste festival organizers have had to incorporate more mainstream acts in order to make the festival financially viable. Major jazz stars such as Wynton Marsalis and Chick Corea are now mixed with crowd-pleasers such as Seal, Earth Wind and Fire, Maceo Parker and even electro.

In 2011, the Nice Jazz Festival passed under the direct management of the city of Nice and the venue was changed from the Jardins des Cimiez to the Jardin Albert I in the center of town. As the concerts are now easier to access, attendance records have climbed.

Practical Guide to the Festival

There are two venues at the Jardin Albert Ier:Theatre de Verdure and Scene Matisse. The two venues contain stages and are connected by walkways. Admission includes both venues; there's no problem wandering from one to the other.

The Theatre de Verdure is an amphitheatre arrangement while the Scene Matisse has "festival seating" which means no seating. There are picnic tables nearby where you can sit and listen to the music without seeing the performers.

A number of stalls sell Nice specialites like Socca as well as sandwiches, meat stew, beer and wine. The selection is limited so it's a good idea to bring your own nibblies.

You can buy tickets online at the Nice Jazz Festival website or at any Fnac, Carrefour or Geant store. You can also buy tickets on site (it's rarely sold out) but there's a €2 surcharge.

Getting to the Festival

As the festival is right in the center of town, it is easily reachable by bus, tram, foot or bike (see more about getting around Nice). There's parking but it fills up fast.