Built in 1867 in typical grand 19th-century style, the station has recently undergone a major overhaul to bring the station into the 21st century. 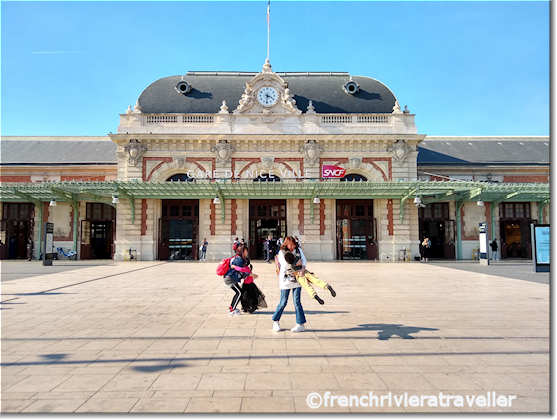 If you need to buy a ticket you need to get there early! It's a busy station, particularly in summer and lines are long.

You can buy domestic and international tickets at the ticket office but most people prefer to avoid the queue and purchase the ticket from one of the machines.

The new SNCF touch-screen machines are easy to use and support English, German, Italian and Spanish as well as French. You can buy tickets, exchange tickets and retrieve tickets purchased online (with a confirmation code). The machines accept coins and credit cards, but not bills. A credit card must have a chip in order to pay for a ticket.

Even more efficient is buying your train ticket online at thetrainline which saves time at the station by giving you a QR code that you flash to access the platforms. 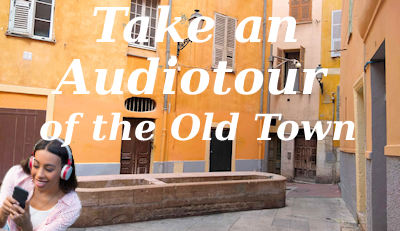 There are seven quays (A through G). Quay A is at street level. To access the quays B through G, turn left after entering and take stairs, an escalator or an elevator to the overpass and then descend the stairs or escalator to your desired quay. Escalators from the quays go up to the overpass.

Get a great deal on car rentals: lowest rates guaranteed

Before accessing the quays, insert the ticket into the yellow validating machine marked compostage de billets. Tickets purchased online will have a QR code. In that case present the QR code to the code reader. 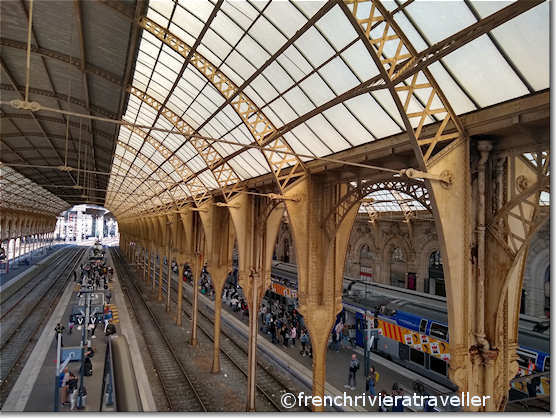 Trains on the Cote d'Azur are less punctual than they should be but the situation has improved in recent years. The infrastructure is vulnerable and strikes are not unknown. For up-to-the-minute information on train delays, check gares-sncf.com

The lost and found office is also to the right of the entrance facing the restaurant Agora. Hours are 9am-noon and 1.30-5pm.

The tourist office is outside and in front of the main entrance. It's open daily 8 or 9am to 7pm.

There's an exchange office in the main hall and a cash machine to the left of the main entrance near the Thello office.

Toilets are to the right of the main entrance. The price is €.80.

There's plenty of food! In addition to the sitdown restaurant, Agora, there's also pastries from Paul, a Carrefour market to buy food, a deli and a number of snack and drink dispensers.

Need an ID photo? Get it done in one of the photo machines. Get ready for Nice transport by buying bus/tram tickets in the ticket machine.

Getting to the Train Station 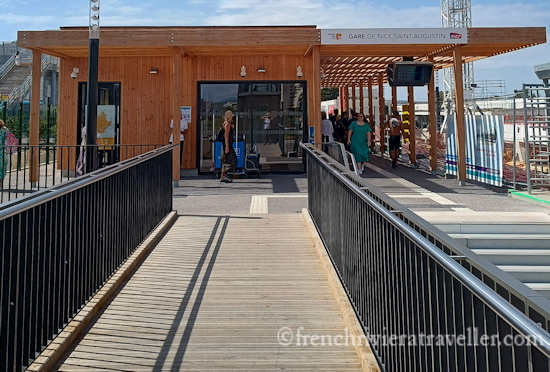 This train station in west Nice is closest to Nice Airport and only steps from the Grand Arenas tram stop on the number 2 tram line. Although the ticket office is tiny and the ticket machines are likely to have lines, the Saint Augustine train station is easy to access and easy to find from the tram stop. Elevators link the ticket office to street level and to the quays. No one would say it's a pleasant place to hang out but it gets the job done. It's definitely the best station to use for those in West Nice or coming from the airport.